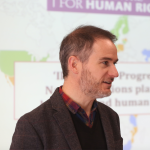 Professor at the Irish Centre for Human Rights, School of Law, National University of Ireland Galway.

Dr Shane Darcy is a senior lecturer and Deputy Director of the Irish Centre for Human Rights in the School of Law at the National University of Ireland Galway. He is currently a Japan Society for the Promotion of Science visiting fellow at Doshisha University, Kyoto. His new book To Serve the Enemy: Informers, Collaborators and the Laws of Armed Conflict is published by Oxford University Press.

Armed groups, while usually having inferior capabilities and less resources than regular armed forces, often mirror certain activities of State authorities during situations of armed conflict. This has included undertaking covert intelligence-gathering practices, such as the deployment of informers, as well the overt punishment of those suspected of having provided assistance to an opposing party in some way.

Considering these activities through the lens of applicable international law provides a clear reminder that although international humanitarian law applies to both State and non-State parties to an armed conflict, this body of law was developed historically with warring States in mind primarily, and while some but not all of its obligations and protections have gradually been extended to non-state armed groups, certain requirements seem to remain rooted in the idea of States, or at the very least State-like entities, are engaged in conflict with one another. The obligation to comply with fundamental fair trial guarantees is a case in point, particularly when examined in the context of armed groups countering internal threats.

As I discuss in a new book, States have long made use of informers as a source of intelligence in wartime, including on the activities of non-state armed groups. The latter have also sought information from the civilian population, and through infiltrating opposition forces and institutions. For example, David French has described how during the British presence in Cyprus:

More recently, Islamic State is said to have developed “a highly complex system involving the infiltration and surveillance of all groups”, including rebel groups and Syrian government militias. Like States, armed groups have understood the pre-eminent value of information in wartime.

And just as States engage in counter-intelligence and treat assistance to an opposing side as a treasonable offence, armed groups equally seek to take measures against both real and perceived internal threats. Islamic State, for example, convened courts which punished crimes such as espionage, treason and collaborating with foreign interests. Even non-state armed groups that have not exhibited key State-like characteristics have sought to replicate the methods and language deployed by States in this context. Ron Dudai has described how the IRA frequently had recourse to “military and state-like vocabulary” in pronouncing on its treatment of alleged informers by way of courts martials. Non-state armed groups in numerous conflicts have punished suspected collaborators by execution, often extra-judicial, but at times following some form of judicial-type process.

Despite the rhetoric surrounding such trials by armed groups, such processes seem inherently problematic from the perspective of international humanitarian law. Common Article 3 of the 1949 Geneva Conventions forbids for “each Party” to a conflict, “the passing of sentences and the carrying out of executions without previous judgment pronounced by a regularly constituted court, affording all the judicial guarantees which are recognized as indispensable by civilized peoples”. This is similar to what human rights law requires – Article 14(1) of the International Covenant on Civil and Political Rights enshrines the right to “a fair and public hearing by a competent, independent and impartial tribunal established by law”.

Such standards only seem achievable by States or State-like entities, notwithstanding of course that both of these can frequently fall short in this respect. But as Sandesh Sivakumaran has noted, Additional Protocol II deliberately uses the language of “independence and impartiality” in describing the required features of a court, rather than “established by law”, to prevent any automatic exclusion of non-state armed groups from compliance. The FMLN in El Salvador claimed with some justification that it was not necessary for tribunals to be “set up according to government law in effect” (although other fair trial failings have been observed in that context).

Determining whether an armed group has complied with the fair trial requirements of international humanitarian law is, according to the International Committee of the Red Cross,“a question of fact and needs to be determined on a case-by-case basis”. Very often the circumstances of such trials reveal that armed groups have not met these obligations when dealing with suspected informers or other collaborators. For example, Amnesty International has reported that trials under Hamas in Gaza of alleged collaborators with Israel were held before courts “whose proceedings are unfair and fail to respect due process”, and after interrogations said to involve torture. A number of Palestinians were summarily executed before their trials were completed. Such acts may amount to war crimes – the Ntaganda proceedings before the International Criminal Court seems to have resolved the question as to whether war crimes can be committed by members of an armed group against those on the same side.

While accommodating trials by armed groups through a flexible approach to certain fair trial requirements of Common Article 3 and Additional Protocol II, as advocated by scholars such as Johnathan Somer and Sandesh Sivakumaran, is preferable to summary executions and indefinite detention, it remains the case that in the context of punishing informers, armed groups have consciously sought to engage in spectacular displays of cruelty and violence towards those they believe have served their opponents in some way, and seemingly in deliberate defiance of established legal standards. Hamas stated that it “will not grant mercy to anyone who provides information about the resistance and its men to the enemy. Field executions will be the number one solution for them”.

In seeking to deter other would-be collaborators, and notwithstanding legitimate questions about their capacity for convening fair trials, armed groups are in this context replicating the prior practices of States. The Lieber Code stated bluntly that “[t]he war-traitor is always severely punished”. During and after the Second World War, both Allied and Axis authorities publicly executed traitors, following trials which often lacked due process. The so-called “first war crimes trial” of the Second World War, the Krasnodar trial, saw the prosecution of a number of Russian citizens accused of treason for joining SS units during the German occupation of Soviet territory. Several were executed by hanging in front of a crowd of thousands which chanted “Death to the traitors!”, after having tried by a military tribunal without cross-examination of witnesses, adequate representation, or the right to appeal.

While such practices are less common amongst States at present, many armed groups have not foregone extra-legal and cruel methods for countering the internal threat that is presented by informers and other collaborators in their midst (whose presence is very much embraced and cultivated by their opponents, including States), despite the increasingly clear requirements of international humanitarian law, including those obligations that may have initially been developed with States in mind.